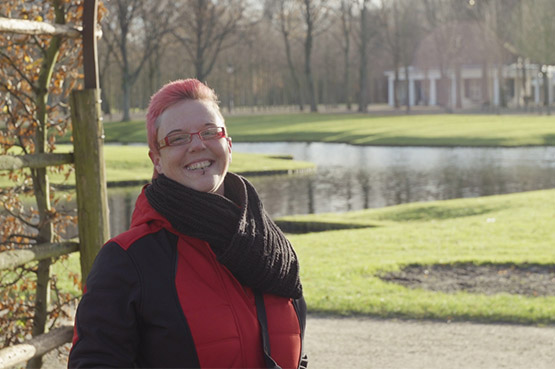 In 2008, Angie needs surgery due to a spinal disc herniation. She cannot move properly, is in pain and her right side is paralysed. Even after surgery, her right  leg remains paralysed. This and other signs lead doctors to suspect that she might suffer from multiple sclerosis (MS). For a final diagnosis, Angie is under medical supervision for a year and undergoes various tests. After one year, there is certainty: She has MS.

From Wheelchair to Orthosis - Angies Path with Orthosis

Many articles describe multiple sclerosis as the disease with a thousand faces: paralyses, fatigue, vertigo and impaired vision are just some of the symptoms that can occur. The disease is not curable, but according to the current state of medicine, the people affected can have a high quality of life for a long time.

When Angie is faced with the diagnosis, she does not know what to expect. The disease is different for everyone. Usually, a drug treatment is administered in order to cope with the episodes that occur. In 2011, she suffers a cardiac arrest due to a drug intolerance and only survives barely. After that, she cannot walk, speak nor eat properly. She has to relearn everything.

Angie says it is important to have a stable environment in order to get out of the hole you are bound to fall into. Her friends, family and her then nine-year-old son support her in any way possible. Her son builds an obstacle course of broom handles and other items in their apartment to make her lift her legs. In his childlike manner, he searches for words that are particularly long and difficult. Thus, the first word Angie manages to speak after a long time is “Honigkuchenpferd” (German pastry, used in a phrase that roughly translates to “to grin like a Cheshire cat”).

Initially, she receives a wheelchair and later crutches and a walker. She only learns about orthoses from a medical supply store in 2010. However, the additional payment is very high and the knowledge about chances of success so little that this option is out of the question for Angie. In 2011, she is approached again with the subject of orthotic treatment. Someone wants to build a piece to qualify as a master craftsman. This is her chance to get to know the orthosis and not worry about high additional payments.

The treatment and the piece are a success. At first, Angie is scared to rely on the orthosis. She has hardly any feeling in her knee and does not trust the orthosis to support her weight. She walks with two crutches and locks the knee joint in order to keep the orthosis rigid. Soon after, she feels confident enough to use the orthosis joint in the automatic mode. This means that the orthosis recognises when the joint should swing freely and when it should lock.
Looking back, Angie estimates that it took her four to six weeks to walk safely and with only one crutch. The biggest challenge was not physical but mental – to trust that she would not fall, even though her own leg could not actually carry her anymore.

Today, she uses her orthosis to ride a bicycle, chase after the so-called “treasures” when geocaching and go on trips with her son. She lives out her creativity and passes on her support in her voluntary work at the hospital as a member of the Green Ladies and Gentlemen (German association of volunteers who provide pastoral care at hospitals). Angie likes to spend time with the children on the ward and is happy about every little smile. This gives her a lot of strength – especially in times when she is not doing so well herself. And these times come and go and are simply a part of life.