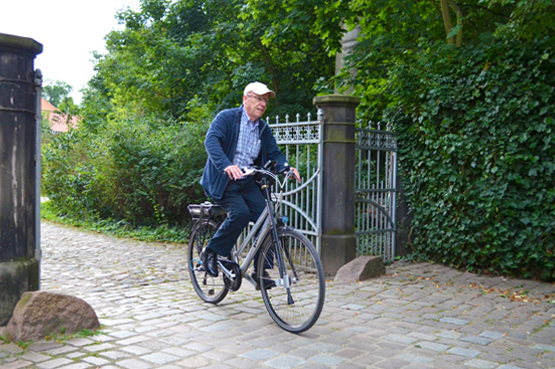 Bert Bröcking is 70 years old. This year, he wants to finish writing his doctoral thesis at the Tilburg University. He worked many years in the health care field in the province of North Brabant (Noord Brabant) before that. Furthermore, he is a member of a working group for people with post-polio syndrome in the association for people with muscle illnesses (Spierziekten Nederland).
He as well as his wife are members of a book club. Of two different book clubs, though. This way there is more interaction with others and additional communication about the differing readings.

Mr Bröcking, you have polio. How was that at a young age? What is your experience?

It was difficult. There were limitations everywhere. Other children climbed trees or played soccer. But I just could not. When my wife and I got children, this was still the case. I could not play soccer with my children. My wife did that, then. My youngest grandson once said to someone that his grandma is very sporty and slim. He laughs. And he is right.

How old were you when you were diagnosed with polio?

The virus had been identified when I was about one year old. But I cannot remember that. Only when I became somewhat older.

How were you treated when you were young? Technology was not what it is today, I presume.

No, it was not. When I was about three or four years old, I received my first orthosis. One with steel and leather. Very uncomfortable. When I was eight years old, my parents and I decided that I would no longer wear an orthosis. The orthosis made us very unhappy. Then, I received orthopaedic shoes. They covered my ankles, almost like a boot, to gain more stability. For a very long time, I solely wore those shoes.

Did you have contact to other people with post-polio syndrome or people who had made in any way similar experiences during their lives?

No. I wanted to be as normal as possible and not stand out or only occupy myself with my handicap. Not until I became 40, had I developed a more relaxed attitude towards it.
At the end of the 80s, I joined the association for people with muscle illnesses in the Netherlands.
I got to know a lot of people with polio there. The goal of our organisation is to improve the care of people with polio in the Netherlands. For example, we meanwhile achieved a polio centre being established at the university hospital in Amsterdam, the AMC (Academisch Medisch Centrum).

It is of great advantage to meet so many interesting people through this organisation who all want the best. Doctors, developers, physiotherapists etc. all have the goal to push things forward and further improve them in order to make lives of people with handicaps easier.

How did you find your way back to an orthosis, then?

I had back pain and incidentally made contact with Prof. Dr. Frans Nollet (today rehabilitation doctor at the AMC). That was 1994. At that time, he was still very young and new to his area of expertise, rehabilitation. He told me that the back pain is caused by the legs or the posture and gait and that he would recommend me a KAFO. I was surprised when I recognised that not much had changed in orthopaedic technology. Still the same heavy orthoses made of steel and leather. How could that be? Again, I was not really happy.

Some time after that, I was asked to test a new orthosis. This time, the orthosis was ought to be made of carbon fibres. My first carbon-made orthosis only weighed 1 kilo, then. In contrast to 4 kilos you wear additionally on your leg, that was quite a relief. But after one year, the back pain returned. I made contact with Prof. Dr. Frans Nollet again. He told me that he wanted to try a new, intelligent joint and I volunteered to test it. And how small the world is. I then learned that my nephew helped developing this joint. Unfortunately, it would not really fit for me as you must be able to swing your leg completely for this SPL joint. But I cannot, so I fell a few times.

And did you get another joint, then?

It still took some time. Kees Noppe asked me if I would like to try a new joint. The NEURO MATIC system joint was completely new at this time and I was among those who were first treated with this joint. It locks differently and I do not need to swing my leg through completely. I can also ride my bike with this orthosis. That is very important and good as I cycle nearly 2000km per year.

How long do you already wear this orthosis?

I have been wearing it for 10 years now. However, I now receive an orthosis with a NEURO TRONIC joint. It is adapted tomorrow. I am curious how it works and how I will get along with it.

Experiences with the new orthosis

In August 2015, you received your new orthosis with an automatic knee joint system. How are you coping with the new orthosis?

I am coping well with the new joint. It locks, when it is supposed to lock.* That makes me feel safe. I like the new stand** of the orthosis even better. For me that is an important and correct improvement.

*Ed. note: Contrary to the NEURO MATIC knee joint system, the NEURO TRONIC knee joint system locks before the foot touches the floor in terminal swing phase (securing mechanism of e-Motion) and stays locked if the leg is lifted while standing or while making smaller steps.

**Ed. note: The alignment of the orthosis corresponds to the gait’s mid stance. When walking, the orthosis’ weight distribution is adapted to the gait, not the stand.

What is the difference to the joint you have previously been walking with? Do you have to do anything differently now?

The joint needs batteries. I have to remember to always take some spare batteries with me. Every now and then I forget.

Do you think you will get used to that?

I have to get used to that. In the near future, a jacket with solar cells might be the solution to the charging issue.

What did the new knee joint improve for you?

Walking consumes less energy. The gaitlab of the rehab clinic of the AMC in Amsterdam is currently checking whether this feeling is true. The results are not in yet.

Do you feel the reduced energy consumption and can you walk longer distances with the new orthosis?

Do you ride the bike with the new orthosis?

Yes. As before, that works fine.

Which book did you last discuss in your book club?

Wolfgang Herrndorf - Tschick. It is a funny book by a German author. I can recommend it.