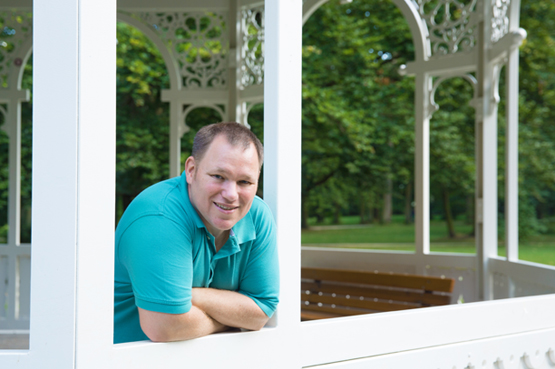 Jarno Rintschwentner is today in his early 40s. He lives with his wife Marlen and his little daughter Nea in a quaint village in the German region Franconia. Almost 10 years ago, his current life seemed inconceivable to him because back then, he was diagnosed with incomplete paraplegia.

10 years ago, the master roofer falls from a 12-metres high roof while working. The height was a blessing in disguise due to the rotation during the fall he hits the ground on his feet and not his head. At this time, he is 32 years old.
His intern at this time immediately calls an ambulance that arrives shortly thereafter. Jarno can still remember the great pain. It does not stop him from trying to convince the rescuers to not cut his safety harness. He still needs it for work. He is sedated on the spot and conveyed to the next hospital. The safety harness must be cut anyway.

The X-rays show a fracture of the 3rd lumbar vertebrae and a fractured ankle and fibula.
The accident happens at around 9:30. After being transported with an air ambulance from Annaberg to the University Medical Centre in Leipzig (Universitätsklinikum Leipzig), Jarno is operated at around 15:30. The spinal cord is not severed, but because of the fracture of the lumbar vertebrae, it is strongly compressed and has to be relieved. To stabilise the spine, a so-called fixator is used. The second surgery takes place one day later. A flexible titanium cage is implanted as vertebral body replacement. On the X-ray image, it resembles a common curler. It connects the upper and lower vertebrae where the fractured 3rd lumbar vertebrae was located in between. This way, three lumbar vertebrae become one. The main goal is to stabilise the affected spine part. Only a few physicians in Germany are able to perform a surgery like that.

When Jarno is fully conscious for the first time, he thinks that the diagnosis is not his own: incomplete paraplegia. His first question is when he will be able to work again.

All surgeries go well. Nevertheless, a diagnosis like that is not easy to digest for the patient. The question of when Jarno will be able to work again remains open. There is neither a negative nor a positive answer. Canes stand next to his bed. A silent motivation. For when they stand there, there is hope that he might be able to walk with them some day.

The medical staff uses much medical language in his presence during the normal rounds which gives him the feeling that he is not even present. He is speaking with a good friend and physician on the phone on an almost daily basis. He explains Jarno the terms and tells him repeatedly that he is a mature patient and has the right to get informed about everything he wants to know.

During this time on the intensive care unit, Jarno reaches his low point. Besides his strong will, he needs a prospect, something that guides him. The professor asks him why he feels so down. The diagnosis is an incomplete paraplegia which is not a total paralysis. And he promises that he will be able to walk again sooner or later.

Jarno is discharged from hospital into rehab where he is to be prepared for a life in the wheelchair for at least half a year. They start with the Vojta Therapy. In this therapy, pressure is applied to defined zones of the body to activate reflex locomotion. It is sometimes painful, but it works well. So well that he makes some movements without pressure and an overreaction is detected. His therapist is concerned and consults the Vojta Society which recommends to finish the therapy. An IQ test, PNF and Bobath therapy, and ergotherapy follow.

Six weeks later, Jarno goes to the clinical and radiological follow-up appointment in the University Medical Centre in Leipzig. Jarno is sitting mostly in the wheelchair at this time. He is lucky that the attending senior physician remembers him well and asks about his rehab. Jarno talks about it and asks if he will get rid of the wheelchair one day. The senior physician tells him about joints and bars which can support the walking process. This is his anchor. He is motivated when he returns to the rehab.

Jarno asks the therapists at every opportunity about the bars the physician has told him about. But nobody shows real interest in his questions. He has the feeling that he is pigeonholed and cannot do anything about it. The wheelchair seems inevitable. The word orthosis has not been mentioned so far. He keeps asking his therapists and finally gets an appointment with the in-house medical supply store. Five months after starting the rehab, Jarno receives his first orthosis. The first steps cannot be described as normal walking. But after a while and with ongoing physiotherapy, he has learned to walk with orthosis and crutches.

But they still recommend to take along a wheelchair before discharging him so he could at least transport a few things. Jarno attaches a cup holder to his crutches with adhesive tape. This way, he can transport things, too, he says. He argues that a wheelchair for 4000 euros is certainly a waste of money. He is discharged with orthosis and without wheelchair.

His old life is over now. Physiotherapy, exercise and the goal to improve his walking more and more are on the agenda. 92 stairs lead to his apartment which is on the 4th floor. He moves in with his parents because he still needs help with many things in his everyday life. He has high demands on himself, his body and the orthosis at this time. His expectations are high. The orthosis is a simple side bars/bands orthosis which is not designed for his indication. It breaks frequently, so Jarno sometimes has to manage without the orthosis for ten days. As a result, his mobility is severely restricted.
Through his medical referee, he gets in contact with a medical supply store which still supplies him. The medical supply store Mayer & Behnsen in Zwönitz gives him advice and suggests an individually designed orthosis made of carbon with joints which are adequate for his indication and his demands. The costs for an individual custom-made orthosis are very high. The medical referee asks for a consent for the assumption of costs by the Employers' Liability Insurance Association.

And again Jarno tries everything - makes phone calls and calculations, brings arguments, and fights for receiving the best possible treatment. Finally, he receives the approval and his first custom-made orthosis made of carbon with the automatic knee joint system NEURO MATIC. He had envisioned that he would be able to manage stairs and walk like he did before his accident with the help of the orthosis. At the beginning, the orthosis seems too heavy for him in comparison to the side bars/bands orthosis and also inconvenient. In retrorespect, Jarno says that his expectations were far too high.

During this period it is not just about the body but also about bringing together the image you had of yourself before the accident and after it. With an incomplete paraplegia, you cannot become a hurdler anymore, says Jarno today.

Jarno puts on the orthosis every morning and puts it next to his bed not before evening. His gait is improving continuously. And his scepticism is fading, too. Worn under trousers, the orthosis is not visible. When someone asks him whether he had torn his cruciate ligament by playing football, it is a great compliment for Jarno. He gets used very quickly to his new appliance, gets more and more active, confident and starts handcycling, besides the daily physiotherapy units. Wearing the orthosis becomes quite quickly natural. Like clothes you put on in the morning. After some time has passed and after more appointments with the medical supply store, Jarno receives a new orthosis with a new automatic knee joint, the NEURO TRONIC. This joint locks automatically and detects the movement and position of the lower leg through motion sensors. When Jarno is standing or is right before heel strike, the sensor detects this and the joint is locked. The sensors of the orthosis detect automatically if he wants to go or stand and the joint enables the movement right in time. Jarno still walks with this system today.

EVERY BAD THING HAS A GOOD SIDE

The accident, the time after that, the worrying, the fighting - you need much strength for all these things. Jarnos' social surroundings are a silent motivation during this time. His parents support him completely, visit him every day during his time in the hospital. An important factor for his rehabilitation are also his friends, the Employers' Liability Insurance Association, medical staff and later Jarnos' own little family. They gave him so much, giving up was not an option, he says. Even if he wanted to sometimes.

Many taboos, worries and problems are a part of life with a total or incomplete paraplegia. Many things are not discussed in public, besides the walking, for example topics like urinary and bowel function or sexuality. And the opinions of the healthcare professionals about the treatment are sometimes very different, too. Regarding his own experience, many people think that orthoses are heavy appliances made of leather and steel which restrict the movement and are difficult to put on.

Jarnos' intention is to encourage other people. Not giving up, asking questions and trying everything that can help you as a patient. He says that every bad thing has a good side. He values the little things and knows what is important for him.