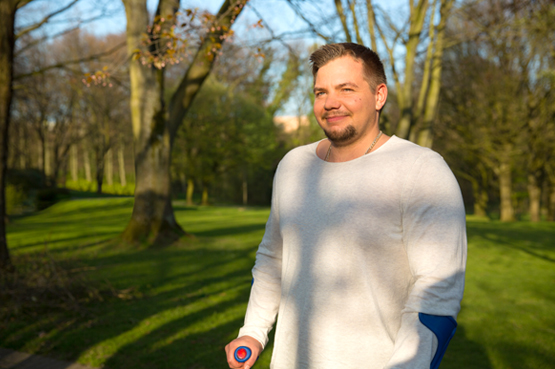 120kg. That is about eleven bottle crates, three bags of potting soil, the weight of a miniature Shetland pony or the number of kilos Julian Lichte can bench press. When he is standing in front of you, he has an impressive appearance. The fact alone that he is standing is a miracle of its own. Julian Lichte is paraplegic. Both of his legs are paralysed while his upper body and arms are fully functional. Julian’s experience and stories could be the source to a film script.

In 2000, Julian is 16 years old since two months when the high spirits of his youth overcome him. He is a sporty guy and a real teaser. One night, he climbs up the outer wall of a car park. He falls down four stories and hits the ground with full force. He manages to call an ambulance with his phone. The next thing he remembers is waking up in the hospital.

His mother is by his side when he wakes up. In her eyes, he can see that something is wrong. Later, he finds out that he has a comminuted fracture between the last thoracic vertebra (TH12) and the first lumbar vertebra (L1). Both legs are paralysed. The doctor explains to him that he very likely will not be able to walk again and will need a wheelchair. Julian undergoes a surgery where a piece of the iliac crest is removed in order to stabilise the damaged region of the spine. More surgeries follow.

Julian says, that time was a complete disaster - emotionally, psychologically and physically. His friends and family are always there for him and support him in any possible way. Nevertheless, dealing with such an accident is not easy. Looking back, Julian says, that during this time he developed a strong sensibility for interpersonal relationships. He experiences small gestures, facial expressions, posture or the intonation of words much more intense than before.
He gets to know many patients with similar fates. One or two of them try to motivate him to use a wheelchair. The feeling of solidarity between them is strong.
During physiotherapy, the exercises focus on working with a wheelchair. By accident, a therapist comes into his room with crutches shortly after he was injured. It turns out to be a misunderstanding, but Julian still thinks about this small moment to this day. He says, that moment might have been already been pointing the way. After that, crutches or orthoses are not a topic on the agenda any more.

Two and a half months later, he is released from the hospital with a wheelchair. At the time, his parent's apartment is located on the third floor. There is no lift. His mother helps him carry himself up and down the stairs every day. Shortly before the accident, they had an addition to the family: Julian has a brother now. About his mother, Julian says that she is a fighter. She takes care of her two sons like a lioness, all the while researching on the Internet for further possibilities to help Julian. She comes across orthoses as well as a wheelchair that can be used vertically. The wheelchair has a delivery period of six months. Julian gets two orthoses. It is solely for his mother's research and the great effort of his physiotherapist Gabi that Julian encounters orthoses at this point. He describes them as "bulky" and is annoyed by the act of putting them on. Out of spite, he puts them on and takes them off a hundred times. After that, putting on the orthoses is not a problem anymore. He uses them for physiotherapy and tries to incorporate them in his everyday life. With a lot of exercise, he is able to stand wearing orthoses. A first success that is based on the tireless commitment of the two women in Julian's environment.

Physiotherapy and exercise determine Julian's everyday life from now on. He wants to make use of everything that is possible. He wants to be able to stand and even walk. However, there are many questions: Which possibilities offers physiotherapy? Are there orthoses, which he could walk with? What is the best way to support his body? Where can he find more information about it?
In the physiotherapy centre, Gabi supervises him. She is incredibly committed and keeps finding new exercises for Julian. Every tiny success motivates him. Julian himself keeps coming up with new ideas as well. He tries everything from electrostimulation and blocks of ice, which are supposed to stimulate the muscles, to an electrical home trainer bike, in which he basically sleeps at night while still moving his legs. With the help of crutches, he practices changing platforms in the underground wearing his orthoses in order to lose his fear of falling and of the automatic doors. His dream is to walk properly with the orhoses.

Every interruption due to a hospital stay is a training deficit to him. Furthermore, the question arises of how to continue school. Due to his long absence, he has a deficit here as well. He starts going to boarding school. His parents and he himself hope for a more intense tutoring to catch up on everything he missed in school. However, eight hours without moving is hard to bear for Julian. After an intermezzo in boarding school, he drops out of school. At 18 years old, he moves out from his parent's place and opens up an internet café with his friend. He can decide himself how and when he is working during the day. Behind the counter, he stands wearing his orthoses. Nobody realises that he is paraplegic. In his environment, he feels well integrated with his orthoses. He uses locked joints. Usually, the orthoses do not withstand the load Julian exposes them to for very long. He puts a lot of strain on them and his body as well and rarely allows himself to take a break. Every movement is exercise for him.
He gets to know many physiotherapists over the years. Some of them are more and some are less dedicated. There are no specialisations for specific patient groups, let alone exercises with orthoses. When Julian realises that he is not making progress any more, he develops his own training concept. He spends all of his free time in the swimming pool, swimming with weights on his legs. During the self-prescribed lunch breaks, he practices standing and small steps with orthoses on the outside rails. Since the knee joints of his orthoses are locked, walking is not possible to the full extend. He needs to keep the knee joints locked in order to achieve maximum stability despite his paralysed legs. The months pass.

Several times, he has an infection in his leg and each time he has to go through surgery. Once, an abscess becomes so bad that he ends up in the intensive care unit and has to be tube-fed. When his doctor advises him to have his leg amputated, Julian loses his nerves. He gets loud and tells him that that is not an option.

As soon as he comes back home, he continues exercising and says goodbye to the wheelchair forever. He is 26 years old now. His next step takes him back to the medical supply store. He receives two new orthoses. This time, they have automatic knee joints, which are locked under load and unlocked during swing phase. With the help of crutches, he practices what is natural for healthy people: walking. He needs a strong upper body in order to keep his balance. In addition to equipment training, he purchases bars. With these, he practices to move his legs and feet to form steps. The strength to do so comes from the hips and the upper body. He places one foot after the other on the floor (toe tap) with a repetition of 1000. This is how his day starts. Four to six hours of exercise per day are Julian's dogma. He spends an average of one hour on the treadmill in the gym. He practices to walk with his hips and legs in a way that enables the automatic knee joint systems of the orthoses to lock and unlock at the right time. On the treadmill, he gets better and better at this exercise.

Today, Julian is 33 years old. His girlfriend Rena says the orthoses stabilise Julian's life. It would have been very different with a wheelchair. They go on vacation, exercise, go out and live in an apartment together that is not barrier-free, because they want to. Julian's will to walk remains unchanged. If he will ever be able to reach the goal of a gait that is close to a physiological one is still written in the stars.
Especially patients like Julian always keep an eye on developments in medicine, orthopaedics and biomechanics. The internet offers patients, their relatives as well as people from different specialist fields the opportunity to gather relevant information. These would not have been so easily available in the time before the medium. The communication and exchange among people as well as visualisation via videos, graphics and photos are very different today than they were 20 years ago. However, Julian still wishes for a better and quicker education on the subject and more responsibility for affected people in order to avoid leaving the possibility of an orthotic treatment to chance, as it was done in Julian's case. Physicians often do not give patients with spinal cord injuries, like Julian, any other option than a wheelchair, out of ignorance or conviction. For many patients, a wheelchair is a good solution. However, in many cases, it is the only solution they are provided with.

Julian Lichte chose a path with orthoses and without a wheelchair.