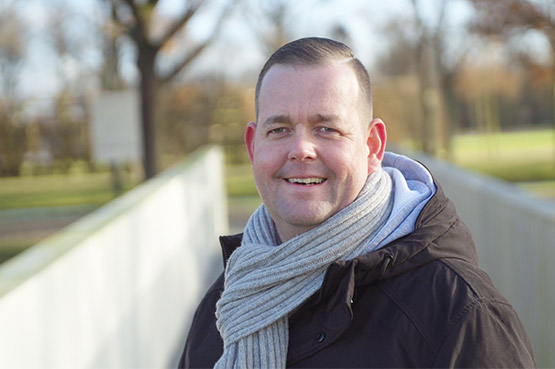 It is not easy to get tickets for the Boom Festival in Portugal. But Marcus succeeded in doing that. He succeeded in doing many things. A couple of years ago, he was forced to relearn everything: to swallow, eat, walk, write and put on clothes.
At the young age of 26, Marcus suffers a stroke. He immediately recognises the symptoms and calls an ambulance by himself. His speech already slurred, he struggles to explain that this is an emergency and not intoxication. He faints in the ambulance. Up until then, none of his friends or family knows what happened to Marcus. Only the next morning, when he does not show up for work, the search begins.

Several months of rehabilitation as well as many ups and downs follow. However, Marcus recognises most of the rays of hope for what they are only in retrospect. He makes progress with occupational therapy and physiotherapy, but an orthosis is not yet in sight. During rehab, Marcus meets the owner of his future go-to medical supply store. He is a service provider of the rehabilitation clinic, but no further contact is made. Much later, Marcus meets him at a town fair. They start talking and ever since then, Marcus is supplied orthotically by his medical supply store.

"Sometimes, something has to happen to you in life in order to appreciate certain things differently."

Marcus cannot lift his foot properly because of the paralysis. Due to the foot drop, he cannot walk without the danger of falling. He receives a simple, preproduced foot lifter orthosis made of carbon. It is obvious right away, that it is not sufficient for Marcus’ needs. Two months later, he receives his first custom-made orthosis for Christmas. He is advised to get used to the orthosis at home, on safe terrain. Marcus says, he needed around two months until he could walk safely with the orthosis. Today, he wears his orthosis from morning until evening, at festivals and work as well as on vacation. He does not leave the house without his orthosis anymore.

Not being able to pursue his profession at such a young age is particularly hard for Marcus. At the time, he decided wholeheartedly to work in the field of geriatric care and was responsible for an entire team as a nursing manager before the stroke. Now, at less than 30 years old, his professional career is supposed to be over? Thanks to his old network, and also a little coincidence, he was given a new option. Marcus is asked if he would consider working as a lecturer on geriatric care and, thus, to share his experience and passion for the profession. From then on, Marcus works as a lecturer. This year, he will travel to Portugal with his friends. He is trying out a new orthosis joint, which he can also wear on muddy terrain. Because Marcus does not let himself be restricted, rather the opposite is the case.