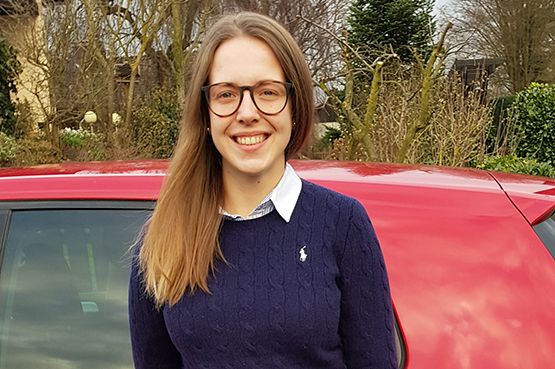 Milena does not have it easy when she sees the light of day. A few minutes after the birth, her breathing stops. She does not get any oxygen for four minutes.

This is followed by years in which she has considerable problems with her legs. As an infant, she is diagnosed with pigeon toes and hip dysplasia, which is a congenital or acquired malformation of the acetabulum. When Milena learns to walk, her parents notice that she has coordination difficulties. Her gait remains prominent over the years – she has an internal rotation of the legs, a valgus deformity of the knees and a pes valgus deformity, which is a deformity of the foot with a lowered inner edge and a raised outer edge of the foot.

Due to her disturbed spatial perception of her own legs and the disturbed perception of her legs in relation to the rest of her body, she often looks at her feet when she walks out of insecurity. Milena has also had regular severe pain with neuropathic character in her legs since early childhood. These are initially believed to be growing pains, which will turn out to be false when she reaches adulthood. Physiotherapists advise her to start horseback riding.

Then, the accident. In 2013, Milena’s horse steps on her right leg. She suffers a torn cruciate ligament and a meniscus injury.

The surgery is not performed until nine months later. Afterwards she continues to suffer from knee problems. When Milena quits horseback riding in 2016, her gait and coordination steadily deteriorate. In the same year, she begins her studies of orthobionics at the Private University of Applied Sciences Göttingen. With the knowledge she acquires, she is able to better understand her own gait.

After a hospital stay in 2018 in the neurological department of the University Hospital Göttingen, no diagnosis can be made. However, hereditary spastic paraparesisordystonia of the calf and foot muscles (meaning incomplete paralysis of both legs with involuntary contractions of the muscles) is suspected. The therapy proposal: Achilles tendon lengthening or botox therapy. Neither is an option for Milena.

With her instructors, Milena discusses the possibilities of orthotic treatment for the first time. In 2017, she is fitted with insoles with sensorimotor elements. Unfortunately, there is no improvement. A second attempt with sensorimotor insoles follows, this time combined with preproduced AFOs (ankle-foot orthoses) from an established manufacturer. The carbon AFOs are designed to be dynamic, but have no joints. The attempt shows no success. The treatment with an external rotation brace is ineffective as well.

In 2018, Milena finally receives custom-made DAFOs (dynamic ankle-foot orthoses) made of plastic. There is now minor progress to report. A few months later, in early 2019, she is supplied with custom-made AFOs in which the plastic DAFOs are integrated. The AFOs are equipped with ankle joints, but the spring force of the joints is too low to give Milena enough stability when standing and walking. For this reason, the mobility of the joints must be completely blocked. Walking is easier for her with these orthoses, but she still has an unphysiological gait and develops compensation mechanisms.

For example, she tilts her upper body forward when walking in order to compensate for the lack of muscle strength in her legs. She continues to have severe and frequent pain in her legs and difficulties with her posture, both when standing and walking. Walking on sloping surfaces takes a lot of effort. She is particularly distressed when the spasticity in her legs suddenly sets in and she has to take off the orthoses quickly to avoid bruising. If she does not wear her orthoses, however, she feels the spasticity worsen.

The breakthrough finally comes at the end of 2019: Milena herself builds two custom-made, unilateral carbon AFOs with NEURO SWING H2O system ankle joints. She combines the AFOs with sensorimotor elements. The AFO’s ankle joints, together with the tibial shells on the shins, dynamically bring Milena into an upright position and improve her stability when walking and standing.

The inner rotation of her legs and the strong bending of her knees are thus counteracted. Walking on sloping surfaces is now easier for Milena. Long days without breaks and long walking distances in general are no longer a problem. Milena’s step length has increased and her posture has improved significantly.

The pain in her legs occurs at most once in two months, instead of three times a week as before. After taking off the orthoses, the muscle tone is almost normal. The orthoses offer Milena active support when walking and absolute safety. Milena has total confidence in her orthoses and no longer looks at her feet when walking.

“I am no longer afraid of standing in the workshop all day or of walking long distances. Rather, I am happy about every step I take with the NEURO SWING H2O AFOs. Instead of looking at my feet with every step I take, I can just look straight ahead and trust the orthoses completely without stumbling.”

By the way, the ankle joints of the orthoses are resistant to dirt and water. That is a must for Milena now – how else is she supposed to stroll comfortably on the beach? 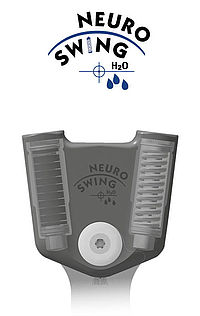