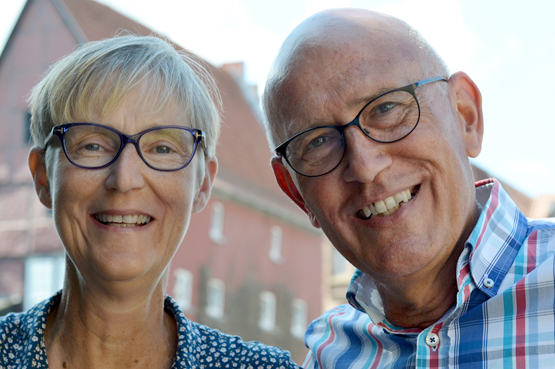 Ronald Moerman is born in 1955. A year later, there is a poliomyelitis epidemic in the Netherlands. Ronald Moerman is already able to walk when his parents notice, that he cannot stand up any more. He is one and a half years old at the time. Shortly after, they receive the diagnosis: poliomyelitis, also called infantile brain palsy. From that point on, his left leg stays paralysed and grows at a slower rate than his right leg.

Ronald Moerman’s father is friends with a doctor. Together they look for a specialist who can help his son. Soon after, Ronald Moerman receives his first orthosis. Usual for that time, the orthosis is a heavy apparatus made of steel and leather, uncomfortable and cold. A necessary evil to stabilise his leg.

At the age of six, he goes through his first surgery. The ligaments and tendons at the hip need to be lengthened to avoid functional impairments. Six years later, he goes through the next surgery. The growth plate of the knee is fused on the healthy leg. Back then, this is a common procedure to compensate a leg length discrepancy. At the time, Ronald Moerman has a leg length discrepancy of approximately 7cm. There is only a small period of time in which this surgery can be performed, before the growth plate closes. The surgery goes well; the discrepancy still exists but it is smaller than before.

Looking back, Ronald Moerman says he had a normal childhood. He even participates in PE classes as best as he can. After finishing school, he becomes a teacher. He does not know any other people with polio. With the development of the internet a better connection becomes possible. There is increasingly more information and better opportunities to exchange information and experience. He says, it was a natural development for most people, but he was nearly euphoric about the possibilities of the internet.

Today, Ronald Moerman has worn orthoses for nearly 60 years. The first ones made of steel and leather, around the year of 2005 the first light carbon fibre orthosis with locked joint and finally, in 2007 he receives an orthosis with the automatic knee joint system NEURO MATIC.
For him, as a teacher, it is important to make a confident appearance in front of his class. If he needs more stability, he locks the joint. If he is out and about with his family, he switches to Auto mode. In this mode, the NEURO MATIC is locked after heel strike and the accompanying plantar flexion (flexion of the foot towards the sole/ground). A slight extension moment during heel lift unlocks the system knee joint and allows movement again.

Despite his many years of experience with orthoses, there are still new impulses and possibilities for improvement for Ronald Moerman. Technological advancements as well as new knowledge concerning biomechanical connections have played a significant role in modern orthotic treatment.

His most recent orthosis is constructed slightly different. What was crucial for that was Ronald Moerman’s position during the making of the negative cast – the first step in the production of an orthosis. Since the orthosis is mainly meant to support the leg during walking, Ronald Moerman’s leg was put in the cast during a gait phase (mid stance). The dynamic of the process of walking was basically transferred into a solid material. Furthermore, the left foot is smaller and has a poorly developed calcaneus. For this reason, the new orthosis has a different foot piece. It helps him to better use the lever forces.

All things considered, the changes on the alignment of the orthosis, the details of the joint functions and the interaction between the system components resulted in a great improvement for Ronald Moerman. His gait has become more harmonic and he walks more confident than before, even in situations with difficult terrain or many people around him, like a shopping street.

Ronald Moerman will continue to follow developments in the field of orthoses and try new things with a pioneering spirit. We look forward to his new experiences.