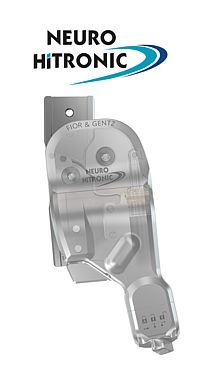 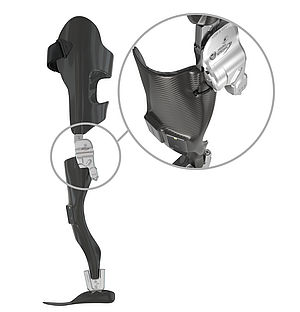 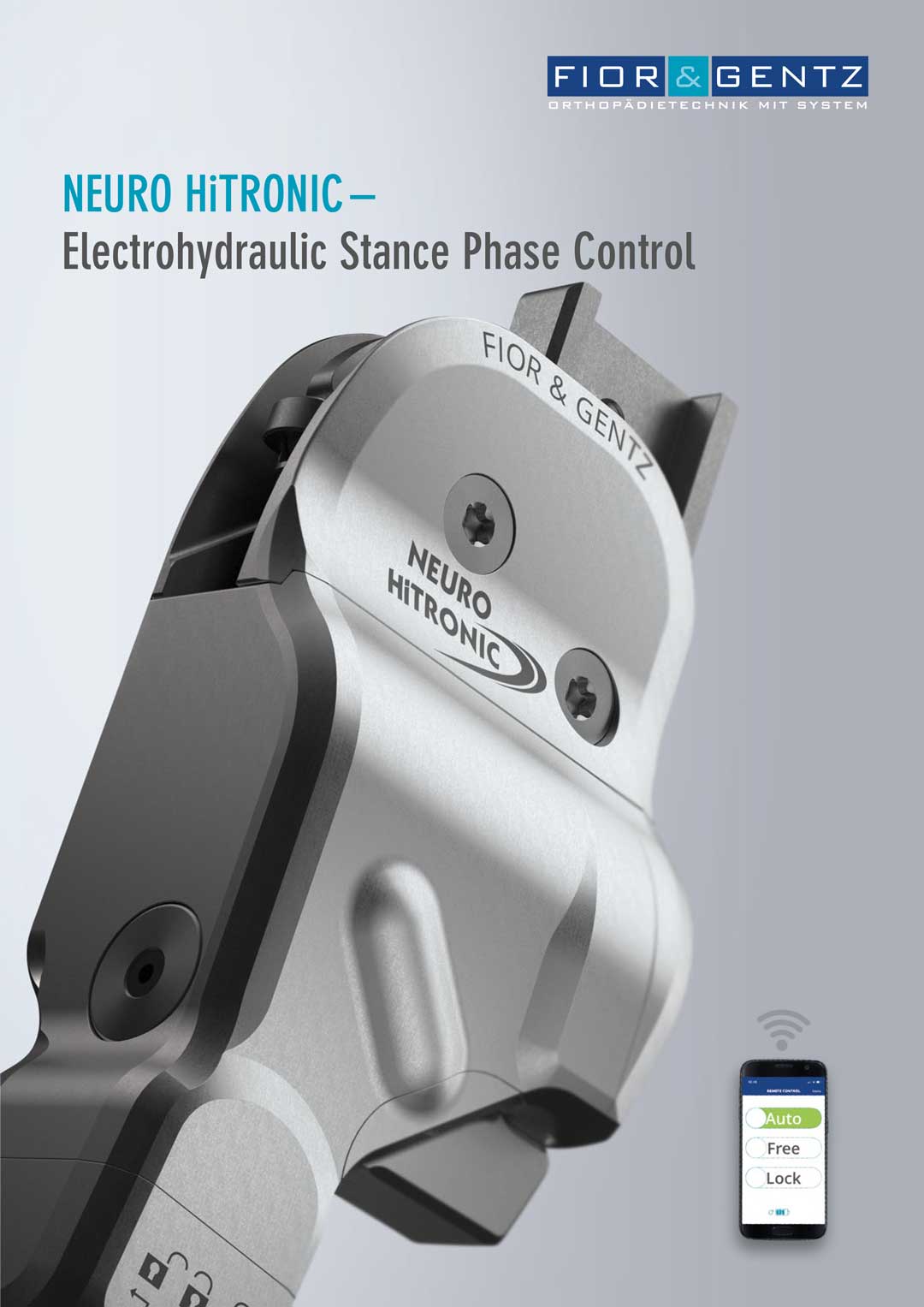 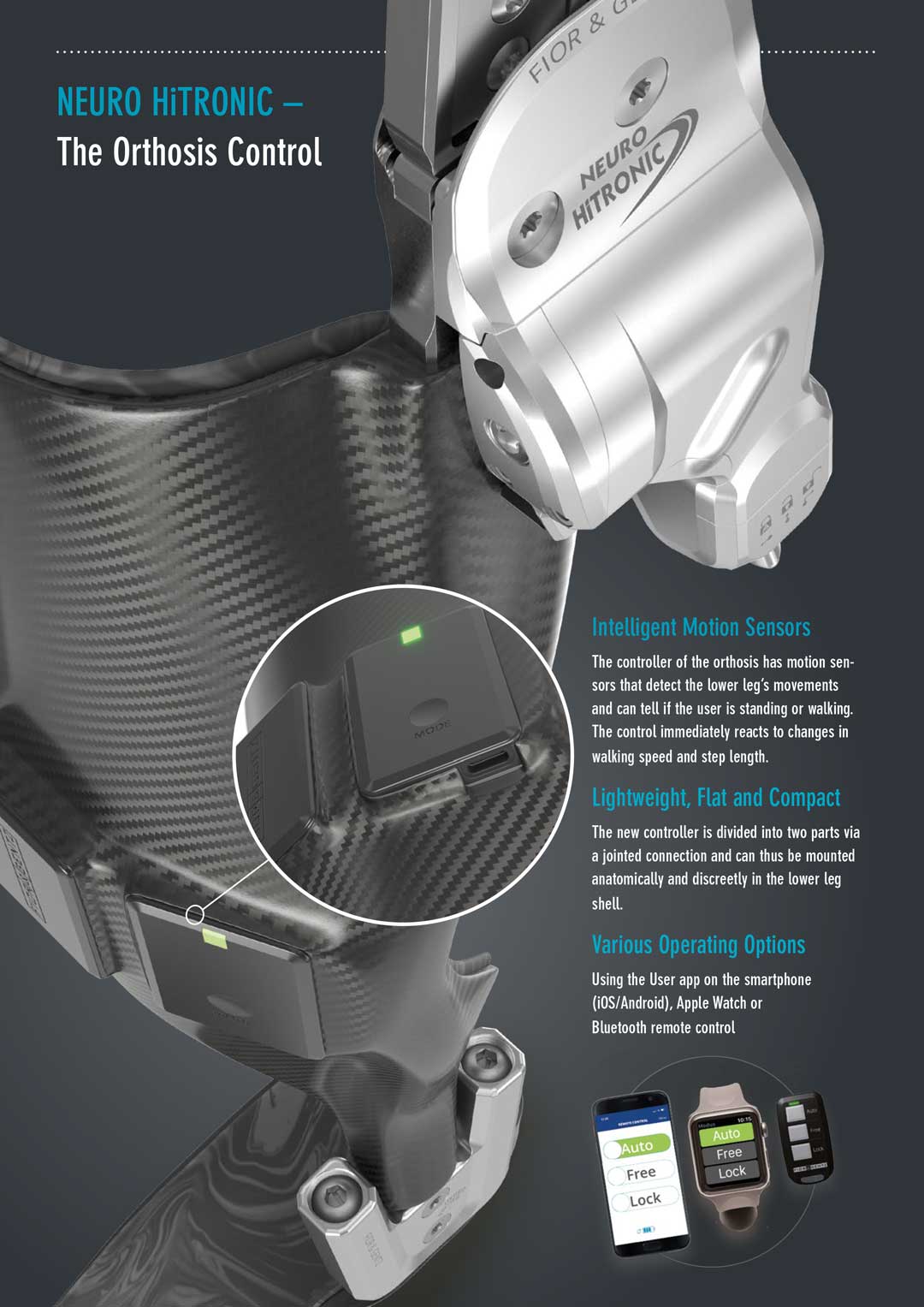 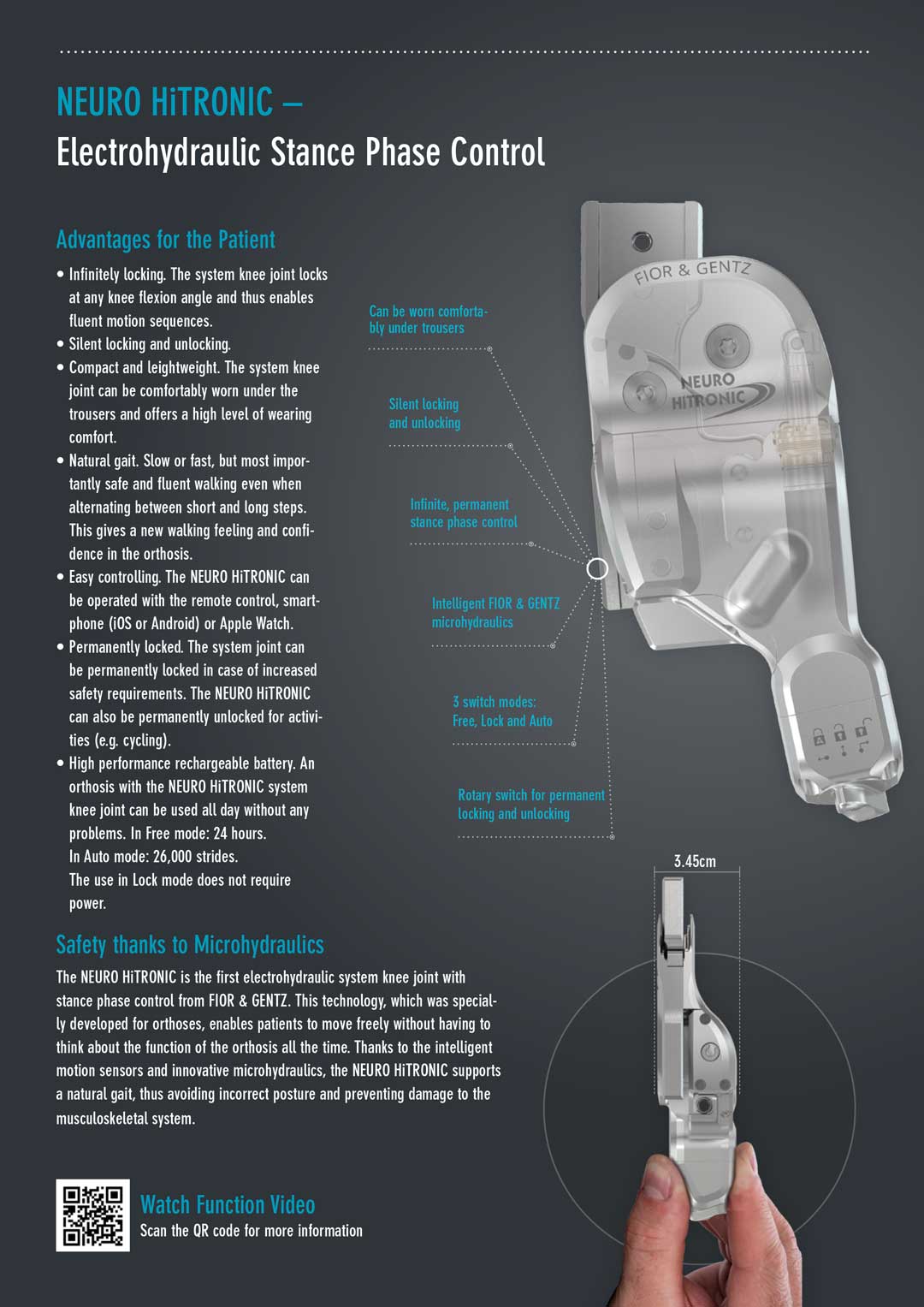 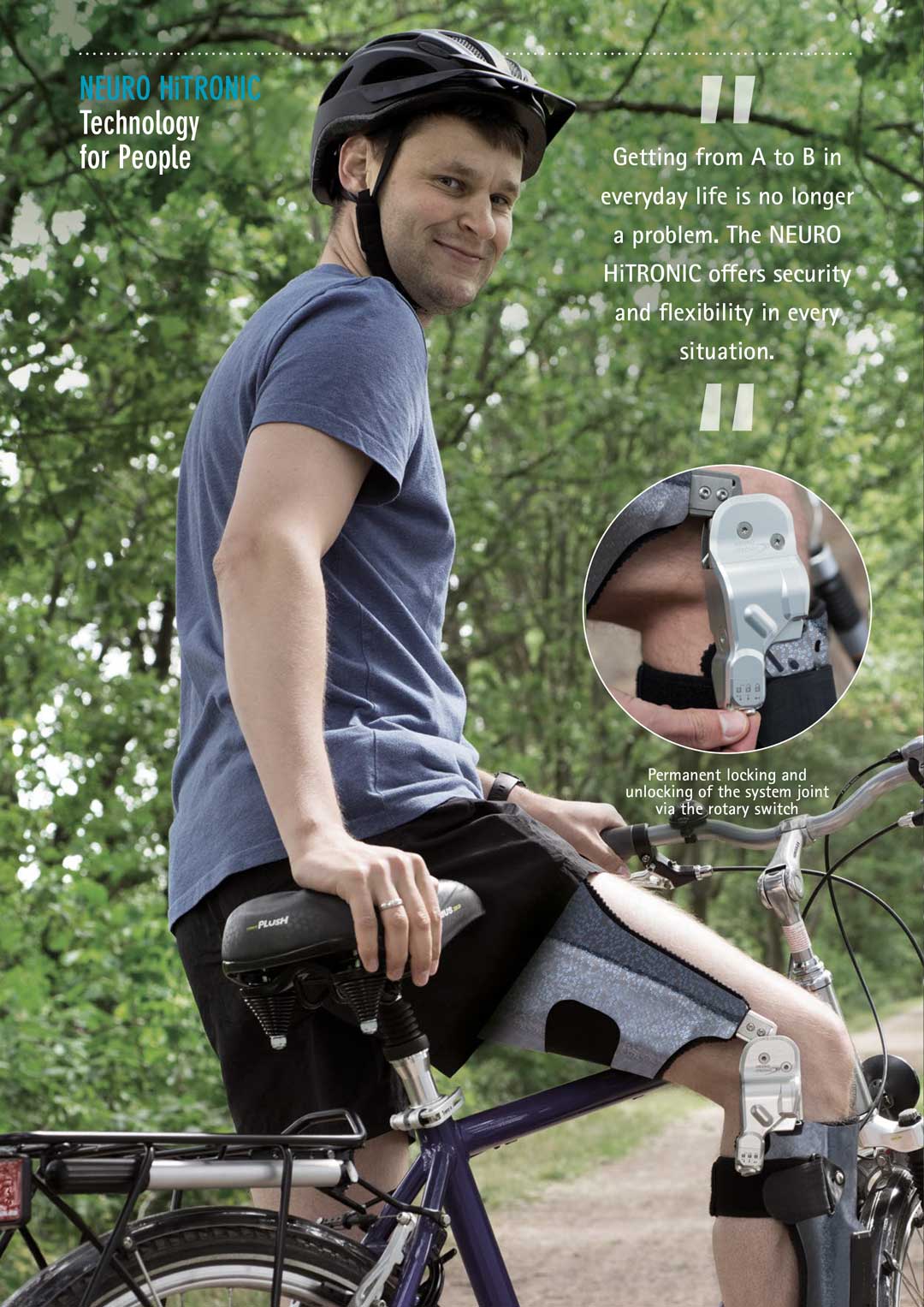 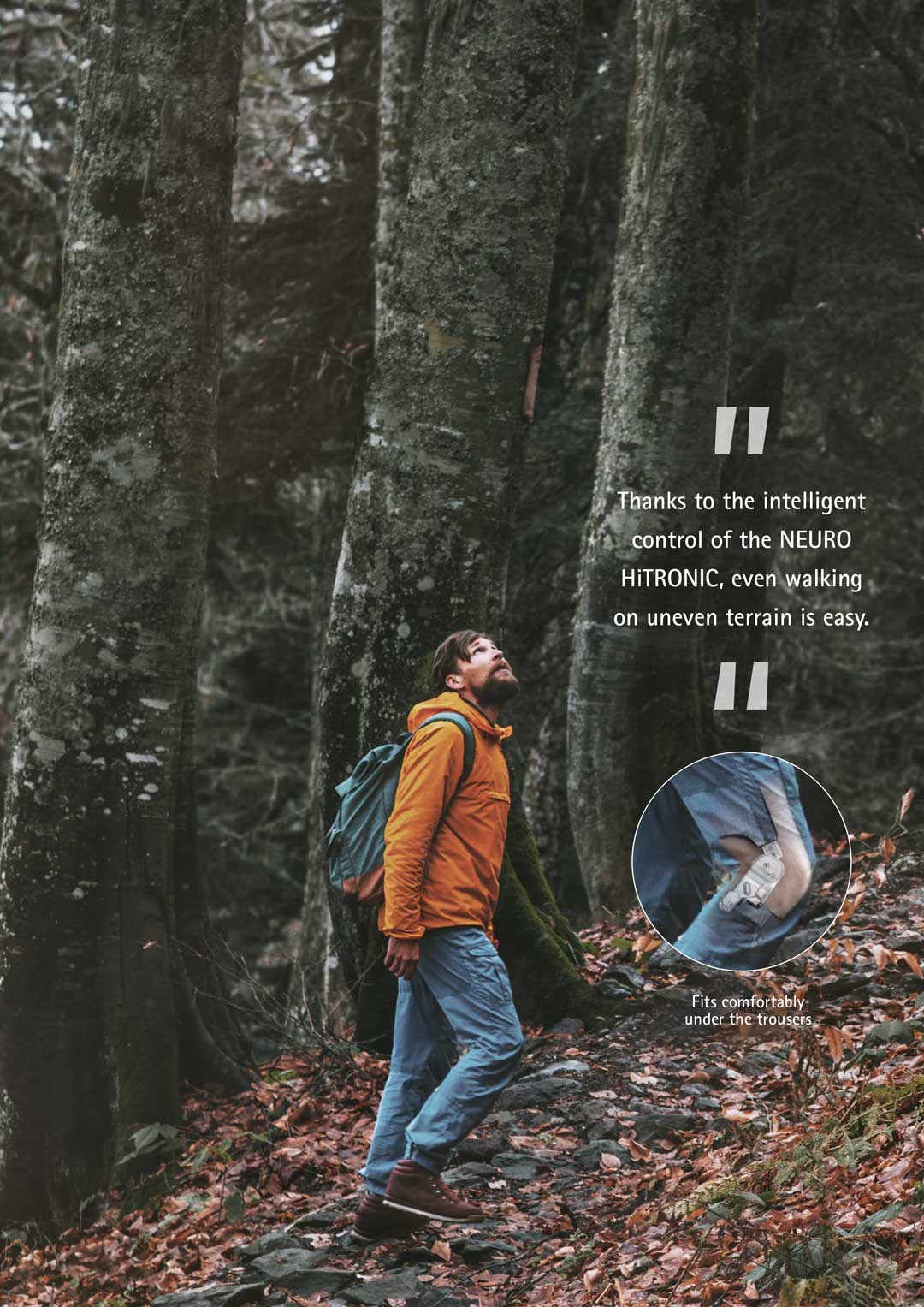 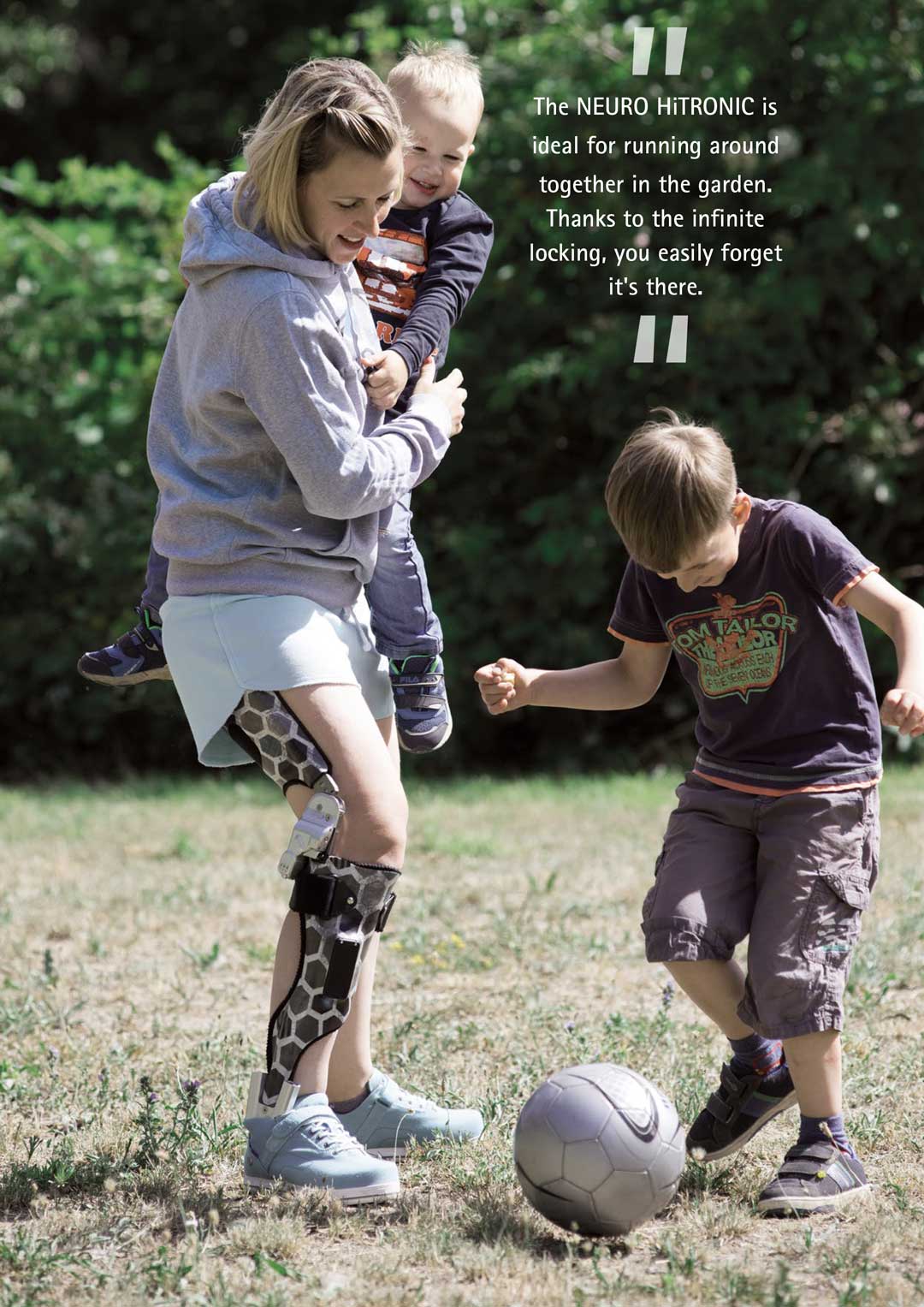 The NEURO HiTRONIC is an automatic, electrohydraulic system knee joint for the construction of an orthosis with microprocessor-controlled stance phase control. An orthosis with stance phase control and microhydraulics designed specifically for the NEURO HiTRONIC provides a particularly high level of safety for the patient. The orthosis is hydraulically locked in the system knee joint to prevent it from bending unintentionally when standing. When walking, the orthotic joint is locked hydraulically during stance phase. In the swing phase, it is unlocked so that the knee can be bent. An integrated air spring supports the forward swing of the lower leg and provides a soft and harmonious feeling during motion. The swing phase is not slowed down. Thus, a particularly natural gait is obtained.

The patented microhydraulics make the orthotic joint small and light. An orthosis with this hydraulic joint fits comfortably under trousers. The NEURO HiTRONIC system knee joint comes with a slim, anatomically shaped controller that contains all the electronics as well as the battery. The controller is discreetly integrated into the lower leg shell of the orthosis. The motion sensors in the controller register the position and movement of the lower leg and signal to the system joint when it should lock and unlock. The sensor data is processed 400 times per second by the high-performancemicroprocessor, which allows the system joint to react extremely quickly to situational changes when walking.

The new technology of the NEURO HiTRONIC system knee joint enables the patient to take the first step with the orthosis leg when changing from stance to gait. This is particularly useful for patients whose legs are both treated with an orthosis with stance phase control. The NEURO HiTRONIC orthotic joint and the controller with the electronics are splashproof (IP44), which means that even walks on the beach or cycling with shorts in the rain pose no problem.

The system joint is preassembled in a physiological joint angle of 5°. Via Bluetooth, the NEURO HiTRONIC is paired with the remote control included in the scope of delivery, which allows the patient to choose between the following modes:

The NEURO HiTRONIC can be operated by smartphone or smartwatch via Bluetooth as an alternative to the provided remote control. The above-mentioned modes can thus be selected via different devices, according to the patient’s preference. For the operation of the system joint via smartphone or smartwatch, the User app can be downloaded free of charge.

The orthotist adjusts the settings of the system joint’s automatic function via the Expert app. Thus, the function of the orthosis can be easily and precisely adapted to the patient’s safety needs and gait. After purchasing the product, the Expert app (only for the orthotist) and the User app (for the patient) can be installed on one or more mobile devices of your choice.

Additionally to the option of changing the mode via electronic devices, the system joint can also be permanently unlocked (Free mode) in a mechanical way. This is ideal for activities like driving a car or cycling. The patient can unlock the system joint themself by means of a rotary switch under the system joint.

Advantages for the Patient

Splash Protection
The NEURO HiTRONIC orthosis joint and the controller with the electronics are splashproof (IP44), which means that even walks on the beach or cycling with shorts in the rain pose no problem.

Natural Change from Stance to Gait
If the patient changes from stance to gait, the ultra-fast high-performance microprocessor registers the change in real time using the sensor data and switches the system joint to walking mode. The new technology of the NEURO HiTRONIC system knee joint enables the patient to take the first step with the orthosis leg when changing from stance to gait. This is particularly useful for patients whose legs are both treated with an orthosis with stance phase control e.g. after suffering from paraplegia on both sides. If the patient stops or interrupts the step, the NEURO HiTRONIC immediately switches back to standing mode.

Automatic Stance Phase Control during Gait
In walking mode, the knee is locked in the stance phases of the gait cycle starting at terminal swing. The sensor system detects the gait phase regardless of the angle between the lower leg and the ground as well as the knee angle. Thus, the knee is locked prior to initial contact. This also applies if the foot meets the ground when stumbling or when walking downhill with the knee bent.

The flexion of the knee is prevented in all stance phases up to mid stance. Consequently, the knee can be extended without resistance during swing phase. At terminal stance, the knee is unlocked so that it can be bent starting at pre swing to execute the swing phase. The knee flexion is carried out without resistance, thus achieving a physiological knee flexion in mid swing. Stumbling due to insufficient knee flexion is therefore impossible. The extending movement of the knee during swing phase is supported by an air spring, which makes walking a smooth and safe experience. In terminal swing, the system knee joint is locked again without play or noise.

When changing between short and long or slow and fast steps, sensors, electronics, microprocessor and hydraulics ensure that the system joint locks and unlocks automatically as described above. In order to adjust the NEURO HiTRONIC to the patient's individual safety needs, the orthotist can set the exact locking time in terminal swing and unlocking time in terminal stance via the Expert app.

Watch the video for the Neuro HiSwing

Instructions for Use for Orthotists or Qualified/Trained Experts

Instructions for Use for Patients

Documents for the NEURO HiTRONIC 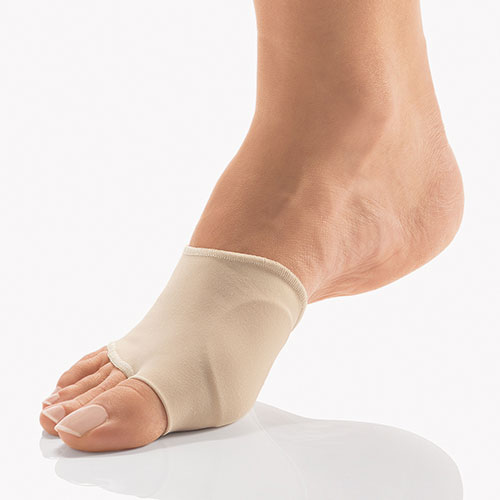 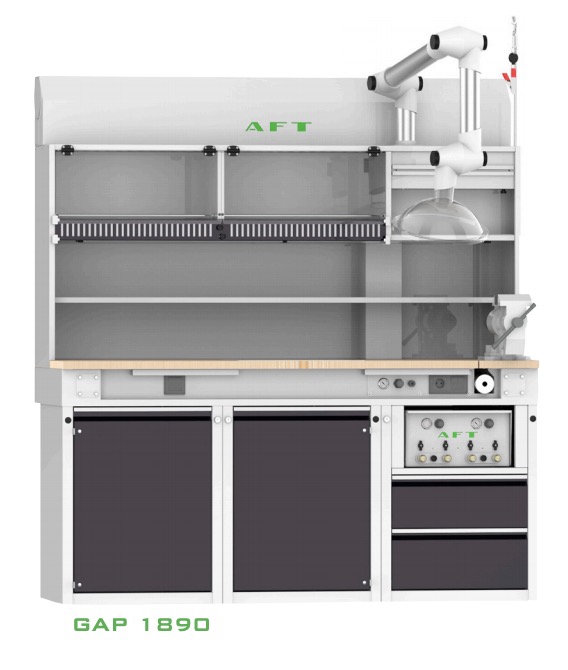 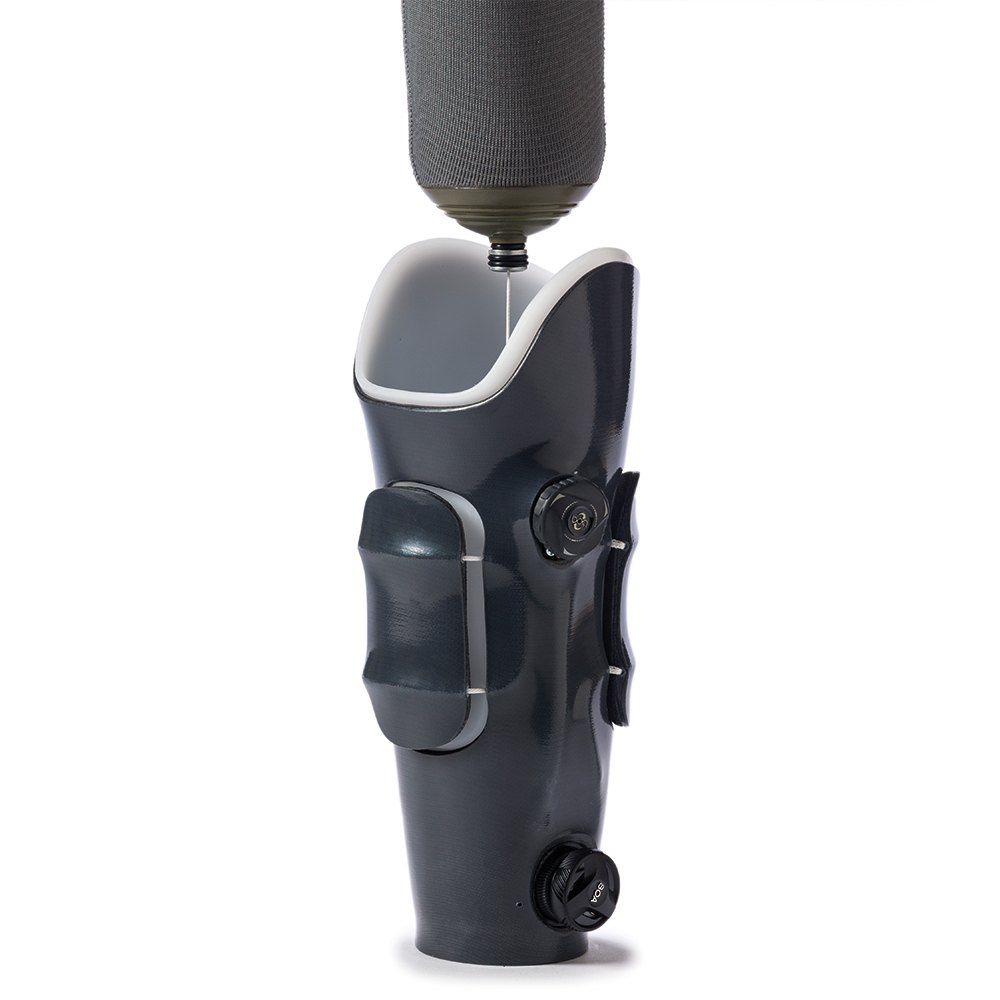